In the Name of Love

Instead of staying at home and knitting and watching dvd's, my weekend was spent mostly with my family and friends. Last night my father took me to see U2 live at Helsinki Olympic Stadium, and let me tell you, the concert was amazing. Now I've seen Rolling Stones, Madonna and U2 and out of those three the last one was definitely the best. I became a sworn U2 fan over one concert. :D

Anyway, my point being: Not much knitting done lately. But then, not much interest in doing anything, really. All the work is killing me at the moment. I just hope it gets easier when school starts and I actually have to spend time at the lectures as well. (On a side note, besides Anthropology, I'm studying Sami, Arabic and Swedish this fall... let's see how well those go together!)


At Ravelry I participated in the Kahelit-group's Challenge-themed swap, and apparently I was too much of a challenge to my partner as I never got anything from her. I just hope everything is well with her. :P
As a compensation for all my waiting in vain, some of the Kahelit-group members were true angels and sent me little packages instead. Have I ever told you how much I love those people? :D

Because my camera and I have a complicated love-hate relationship that is further complicated by our dependency on my (new) computer (that I still don't quite know how to use perfectly), I only got pictures of the first package. It included some lovely Drops Silke-Alpaca, a lovely wooden necklace in a small Marimekko pouch as well as a wonderful Wollmeise version of Herbivore. :D 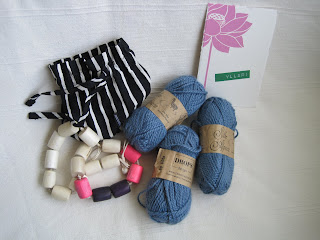 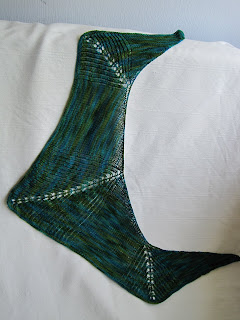 In second "package" I got two patterns from my Ravelry wishlist: Andrea's Shawl and Verity. Thanks to TeijaS for those. :)

In my last package I got a pair of socks in Tico Tico (I've hardly taken them off since I got them!), a blue project bag that is already in use, lots and lots of chocolate in different dorms. Lovely stuff! That was from PäiviH.

Like I said, I really haven't had much time for any crafts lately as I've working a lot. However, this is what's on the needles at the moment, as so far I fall in love ever more deeply with every row. How could I not, as it combines a gift pattern and some gorgeous Malabrigo? 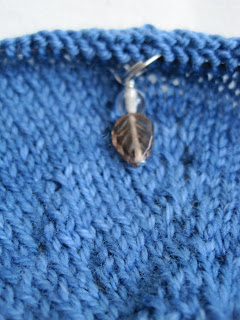 You'll see more about it when it's ready, I promise. 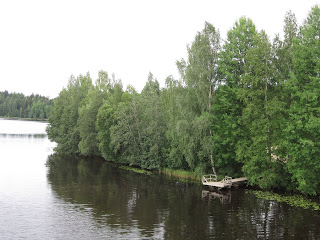 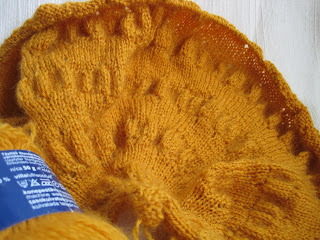 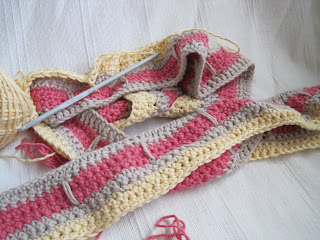 
I wholly enjoyed my two weeks of paid vacation this summer, though as you can imagine, the time was too short for me to actually finish anything. I did start two new projects, the yellow scarf above and a crocheted blanket that's going to be monstrous (both size and colorwise). Then I've also helped my friend with her political project concerning Finnish MPs and self-knit socks. I'll update more about that asap. :)
Posted by alarwyn at 11:16 PM No comments:

Parasta juuri nyt / My Top 5 of the Moment